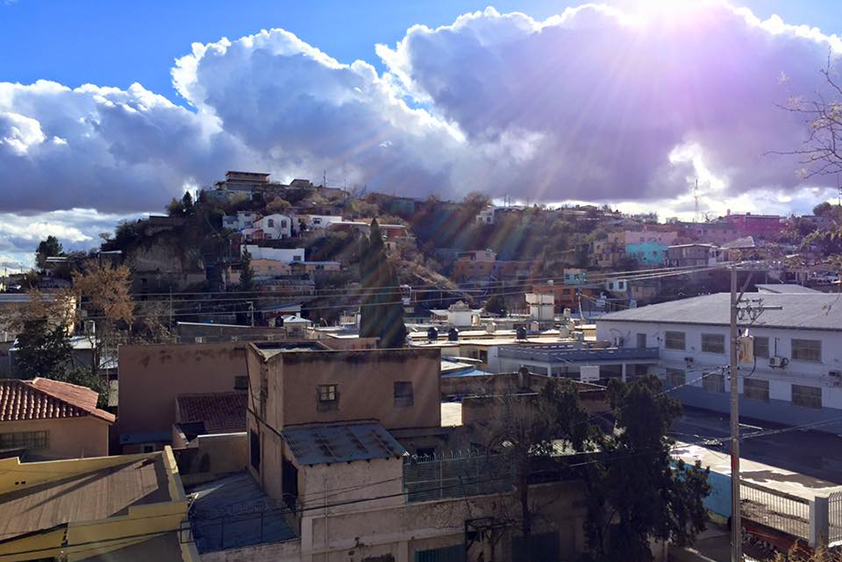 Traveling to the Arizona/Mexico border for an intercultural immersion trip in January hit close to home for M.Div. student Sergio Reyes.

Sergio escaped to the United States when he was 11 years old. Taking nothing but a change of clothes and his favorite toy, he fled his home in Mexico City with his mother, brother and sister soon after his father, a journalist, was murdered.

“Reporters are a threat to corruption because they stand up to it,” Sergio explains.

Stories like Sergio’s are not uncommon among immigrant families—something dramatic happens, causing an urgent need to move away from their home to find a safer one elsewhere.

Sergio’s family was able to get visitor visas fairly easily, especially since his mother was a career nurse. Eventually they received permanent status as resident aliens, meaning they had all the rights of a citizen except the right to vote.

After finishing school, Sergio started a small business making tacos. In 2001, he got married and started a family. He then joined the Army, serving in a peacekeeping mission in Kosovo before taking part in one of the first units deployed to the Iraq War. He earned his full American citizenship in 2003.

In 2008, tragedy struck. Sergio’s wife was in a terrible auto accident, putting her in a coma. She was permanently brain damaged and remains at a long care facility with little hope of recovery.

Because of the difficulty of being a single parent in the Army, Sergio completed his 9 1/2 year enlistment and got out. Knowing he needed help processing both the psychological trauma of war and the complete incapacitation of his wife led him into the church.

“That’s where you go when you want to get your life straight, right?” he says.

Sergio found that volunteering, serving God and studying the Bible gave meaning to his life again. He decided to enter seminary, earning a Graduate Certificate in Urban Pastoral Ministry in 2015. Feeling the call of God to be a pastor, he returned last fall to enroll in the Master of Divinity program.

Part of the formation process at WTS is an intercultural immersion trip for all M.Div. students. Sergio chose to go on the BorderLinks trip, which allows students to meet with pastors and non-profits who are serving undocumented immigrants and their families on both sides of the U.S.-Mexico border. Students also meet detainees at a detention center and hear their stories.

“What’s going on at the border is horrible right now,” Sergio says. “Putting names and faces to the problem impacted me very much.”

He met a young man named Dario who was attending the University of Arizona as an undocumented immigrant. There is no federal aid for people like Dario, and yet somehow he managed to find some fringe scholarships.

“Dario lives in a world where he doesn’t know what’s going to happen next week or next year,” Sergio says. “He has parents who are educated, pushing him to go through college and supporting him, but he realizes other people don’t have that.”

As a result, Dario and some friends created an organization to put together scholarships for other students like themselves.

Learning about Dario’s story and the stories of others made Sergio realize his own privilege and what responsibility he has to help others.

As Sergio interacted with people at the border, he was taken aback to hear the hostility expressed on the issue of immigration and the rhetoric used.

“People at the detention center see those crossing the border as criminals, terrorists, drug dealers,” he says. “Yet, on the flipside, I was encouraged to witness the work God is doing. In spite of the big wall, there is a circle of community around it.”

There are people working to put water in the desert so those crossing don’t die from dehydration. Others have set up a tent with medical supplies. Churches have declared themselves sanctuaries and have housed people in their buildings to protect them.

“At the border you have people who are the most vulnerable in this situation—people like myself who have left home for safety or who just want a better life and want to work,” Sergio explains. “Around those you have the drug dealers and cartels, and on this side of the border our justice system has an industry of jailing and deporting immigrants. A town in Arizona called Florence has three big detention centers, and that’s all the town is.”

For Sergio, the hardest part about the trip is what to do with it now that he’s home.

“When I am a pastor, I would love to be in a church where people understand what it means to stand by someone as a sanctuary.”

“I would tell everyone to go on a trip like this,” he says. “It’s necessary whether you’re white, black, or Mexican. Latinos are everywhere, but we don’t understand the issues they face, and this is a fundamental piece for a pastor to go through.”

Sergio is already working towards reconciliation in the Holland Latino community. Because “Latino” is a broad term that covers different countries, generations, and documented vs. undocumented, there can be a lack of unity. Sergio has created an organization called Uno en Cristo (One in Christ) to help unify these groups.

He is also working to reconcile Latinos with the majority culture in Holland by empowering and connecting the Latino community through jobs and education in a non-profit called Cultivate Holland.

Sergio sees himself as an asset to the Latino community. He knows he doesn’t have all the answers, but he will do whatever he can to connect people to the things they need and to point them to the ultimate sanctuary: faith in Jesus Christ.