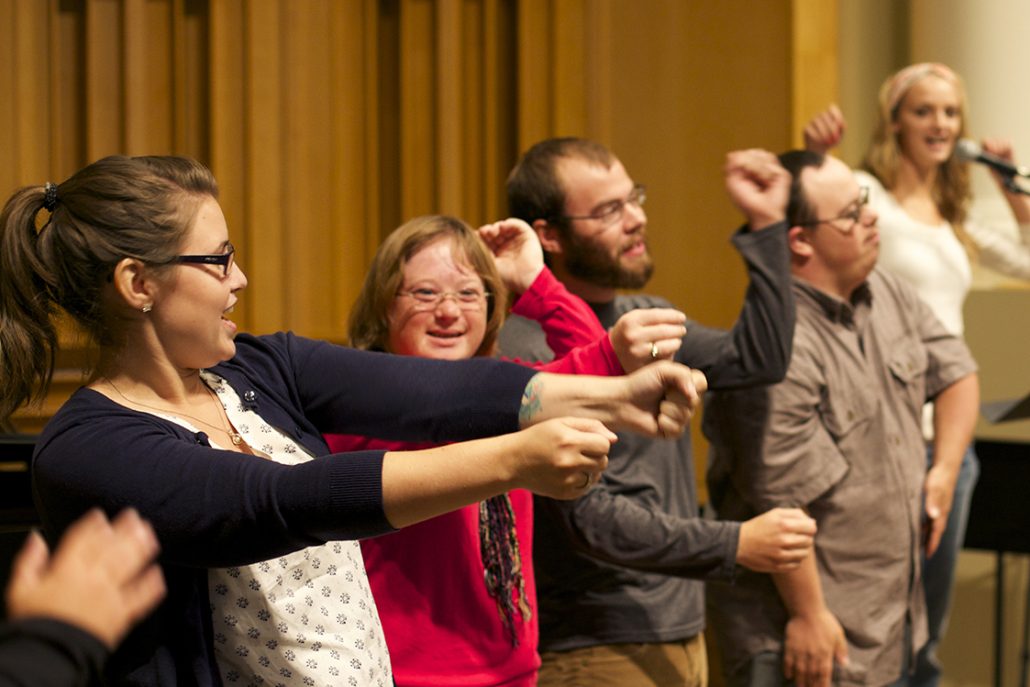 It’s not every day that the students, staff and faculty belt out “Father Abraham” in chapel, but when the Friendship House friends help lead the service, anything can happen!

This year marks a shift in the integration of Friendship House into the life of the seminary. Deliberate steps are being taken to increase interactions with the friends and to create more opportunities to learn from them.

Eighteen seminary students share the Ralph and Cheryl Schregardus Friendship House with six young adults (“friends”) with cognitive disabilities. The residence has six apartment pods and one shared recreation space. When it was built in 2007, it was the first of its kind in the country, and by all accounts it is thriving.

“Our kids have grown immensely. They’ve exceeded all testing measured by Hope College’s professors,” says Deb Sterken, speaking on behalf of the friends’ parents. “My son, Rob, is enjoying people and getting out. He is maturing, and his language continues to exceed expectations.”

Over the years as the friends have benefited from the arrangement, the seminary students living with them have gained insights into ministering to those with disabilities and to their families.

The new director, Melissa Conner, and newly appointed resident advisor Dan DeVries, a third-year student, are bringing fresh energy to Friendship House. Their goal is to expand its impact beyond the 18 seminary students who live there.

Melissa is hosting monthly potlucks open to the entire seminary community. Dan has led chapel with the friends and hopes to have them participate more. They are inviting professors to enter the friends’ space and lead devotions on Sunday evenings.

“I said to the class ‘aloo!’ (literally ‘go up’) and the students got on their chairs,” Dr. Boogaart explains. “But Lyla is a little unsteady and I thought ‘oh no!’ Yet immediately two of the students took her hand and helped her up onto her chair.”

Including Amanda has created a much deeper sense of what it means to be together and do life together. Amanda loves the class and is very proud to call herself a student at WTS.

“The role of student is a valued social role, and she knows that,” explains Professor of Discipleship Ben Conner. “It also puts her in contact with students in a different way than if she was just in Friendship House.”

Amanda’s presence in the classroom has opened new possibilities for the friends.  Several professors are seeing the benefit of having at least one class every semester that could include a friend.

Friend resident Seth VanderBroek says he would like to take on the teacher role.

“I would teach respect, and I’m going to explain why,” says Seth. “I want people to see and feel what it’s like to have Down’s.”

“Many people just aren’t comfortable around people with disabilities.” explains Ben Conner. “They don’t know how to relate.”

Dr. Conner has sought to create shared experiences in his “Ministry in Margins” class, in which he takes the students to watch friend resident Megan Dalman take a horseback riding lesson with Friendship House director Melissa Conner, who also works as a therapeutic riding instructor for children and adults with disabilities.

“The students learn about opportunities Megan has to be independent, empowered, and to learn valuable skills,” Melissa explains.

The friends have a unique opportunity to increase their interactions with peers as they grow older because of their connection with WTS. Unfortunately, this is not the case for many young adults with cognitive impairments.

Sterken is part of an organization working to implement Friendship Houses at other interested seminaries.

At WTS, Dr. Conner and others are working on another creative venture in the world of theological education—a Graduate Certificate in Disability Ministry. The certificate will include classes like “introduction to disability in the church” and even one called “Friendship House.” Students will start to think about how people with disabilities interact with Scripture and how the church can do a better job of including them in the life of faith.

In 2015 WTS will host the Institute on Theology and Disability, which will tie students into the international conversation surrounding this topic.

“Missional is…” by Rev. Dr. George Hunsberger More Than He Bargained For