Fourth-year distance-learning student Rudy Rubio had a rough life before encountering the Lord. Born and raised on the toughest streets of L.A., Rudy joined a gang at age 13 and spent the next 20 years in and out of jail. During his last prison sentence, Rudy fell on his knees, asking God to deliver him from the lifestyle he had been living. From that point on, he dedicated his life to serving the Lord Jesus.

Being in prison no longer as a gangster but as a new and developing Christian was one of the hardest times in Rudy’s life. He didn’t know who he was anymore.

“But as time went by and I studied God’s Word, I soon discovered that my identity was not in the mistakes I had made, the gang I’d belonged to, or my long criminal record,” he says. “My identity was in the risen Christ who had chosen me before the foundation of the earth, and while I was still a sinner, died for me.”

It is hard to guess Rudy’s past when looking at him today. A loving family man—husband to Edna, father to four children, and first-time grandfather—he now spends his days sharing Christ’s love with people in his neighborhood of Lynwood, CA, reading theology as he studies for seminary classes, and pastoring the Reformed Church of Los Angeles (RCLA). The church is the fulfillment of a 6-year dream. 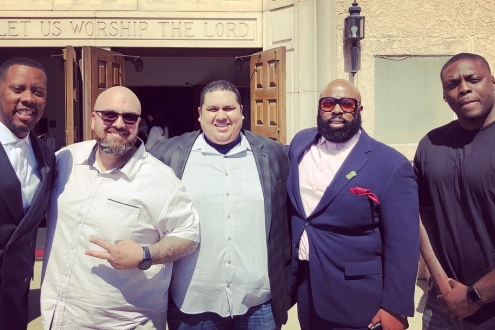 Local Lynwood pastor and leaders showing support of the launch of RCLA.

In 2010, Rudy joined Emmanuel Reformed in Paramount, CA, where he was mentored by Rev. Eddy Aleman, now the General Secretary of the Reformed Church in America. Eddy saw that God was working in the lives of Rudy and Edna, and he challenged them to consider planting a church in L.A. At first Rudy was shocked at the prospect, but by the end of their conversation, he could already feel the Lord stirring his imagination for what a church in “the hood” could look like.

Rudy ended up joining the staff at Emmanuel and learning the ropes of ministry and church operations. He also became a student at Western Theological Seminary, studying for his Master of Divinity degree.

Not all his learning has come from the classroom. Rudy had been deeply affected by an event where he heard Christian hip-hop artist Lecrae perform alongside spoken-word poets. Not only did it speak to Rudy’s love of poetry, it made him realize that people like him, with all he went through in his past, could reach out to others going through similar struggles.

“That moment truly changed my perspective on what Christianity looks like practically lived out,” he explains. “It means not hiding our ethnicity, not working around our cultural differences, but instead using the very nature of who we are as a people—black, brown, Asian, and everything in between—for the sake of the Gospel…reaching our own people in a way that only we can.”

With the blessing of Emmanuel Church, Rudy started an annual spoken-word poetry and hip-hop show to raise funds for church plants.

Finally, in 2017, the church assembled a LAUNCH team of families and individuals (including Chris Marquez, also a 4th year M.Div. student at WTS) to plant Reformed Church of Los Angeles. 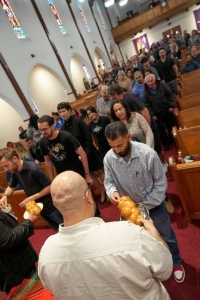 Sharing in the Lord’s Supper at RCLA’s launch service.

In the summer the team visited churches in Lynwood, Compton, and Watts, as well as RCA churches in the greater L.A. area to learn the ways they were engaging their respective communities. That fall the team hosted seven weeks of public worship in Lynwood Park and then transitioned into a building where they continued for several months. On March 25, 2018, RCLA hosted just under 300 people for their official grand opening and Palm Sunday meal.

“Many people from my past life came to our Grand Opening to show support, to encourage, and even ask to join RCLA—people who knew me when I was involved with gangs, used and sold drugs, and even went to prison with!” Rudy exclaims.

God is making all things new. Rudy prays that RCLA will be a catalyst to foster a new culture, to love a community in the name of Christ, and to bring the existing churches together for the common good of Lynwood.

“I want to offer the greatest gift we possess…the Gospel of Jesus Christ!” says Rudy. “I pray for RCLA to make disciples and baptize them in the name of the Father, the Son, and the Holy Spirit.”

To read more about Rudy’s story, learn of prayer requests, and keep up with news from RCLA, go to: www.urbanchurchplanting.blog.