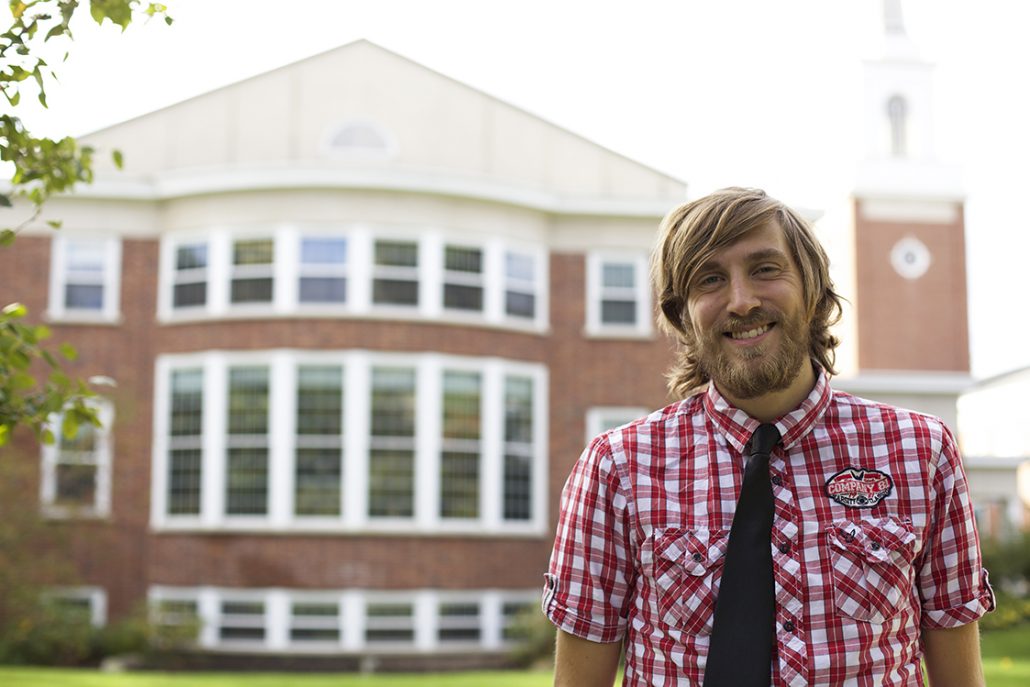 The internship that M.Div. student Jeffrey Hubers had at Riverview Reformed Church in Yankton, South Dakota was no summer vacation—but the relationships he made and the ways he experienced God’s love will affect him forever.

Jeffrey had been excited about the preaching aspect of his internship but intimidated by the idea of pastoral care.

“I was being handed an entire congregation—yes, it was small, 100 people—but suddenly I was responsible for them,” he explains. “I was called to love and serve and give my life to these people—even if it was just for three months—that’s huge. But God is so faithful, and that really is the theme of my summer.”

Within those short months, Jeffrey performed two funerals and comforted a family who lost their son in an automobile accident. As challenging as his internship was, Jeffrey says it has given him a passion for pastoral care, which he wouldn’t trade for the world.

About three weeks into his time in Yankton, Jeffrey met an elderly woman who was battling cancer. As he was visiting with her and her husband at the hospital, the doctor came in and asked, “Is this a good time?” The couple nodded toward Jeffrey and said, “It’s okay. He’s our pastor.” Then the doctor told them that she had fought hard, but the fight was done.

“Everything changed in that moment,” Jeffrey recalls. “I didn’t have any words… No one tells you what it’s like when someone faces death. What do you do? So I read some scripture—I read Psalm 23, and I was crying because my heart was broken.”

During those moments, Jeffrey prayed that God would help him to be calm and give him a voice for the people whom he had grown to love, and God answered.

“God is not absent from us in our sorrow. God is with us, our Emmanuel, and that was a beautiful thing to experience. It was such a privilege for me to be able to enter this family’s life at such a time,” he says.

Jeffrey took on the role of head pastor while Riverview’s pastor was on sabbatical. Because one of the pastor’s normal roles was as the chaplain for Yankton’s fire department, Jeffrey served there as well.

When a 27-year old man was killed after rolling his car, Jeffrey accompanied the deputy fire chief to break the news to the man’s family.

Again, Jeffrey prayed that God would give him the right words to comfort the family. He prayed with them that peace would eventually come into their lives.

In addition to some grim periods of the summer, Jeffrey also had a lot of fun.

He got to work with the youth group and prepare them for “Rocky Mountain High,” an RCA retreat that takes place in Colorado every three years.

He remembers going to the retreat when he was young and the impact it had on his own faith. When the students returned, he asked them to lead worship and share about their experiences in front of the whole church.

“These youth, these brothers and sisters in Christ, are not the future of the church—they are the church now. And they are on fire for Christ,” he told the congregation.

Now that he’s back in Holland, Jeffrey has returned to serving at North Holland Reformed Church as his teaching church. His experience in Yankton has continued to have an effect on his seminary studies as well as his service at North Holland.

“I’ve tasted what it’s like to be loved by people and to be loved by God so completely that I just want that to be the guiding point for where my life will go,” he says.  “People died. People got sick. Real life happened. How do I live that out now at North Holland? How do I live out this faith that I’m learning more about? How do I truly profess Christ as Lord of my whole life?”

Jeffrey is staying open minded to wherever God calls him. He has a year and a half left in seminary, but says that he’s in “a gray area” when it comes to what’s next.

“I could go anywhere because it’s a big world, and I have lived in just a tiny piece of it,” he explains. “I know that wherever I’m at, God is there.”

Fresh Energy in the Friendship House A Brewmaster and a Brother