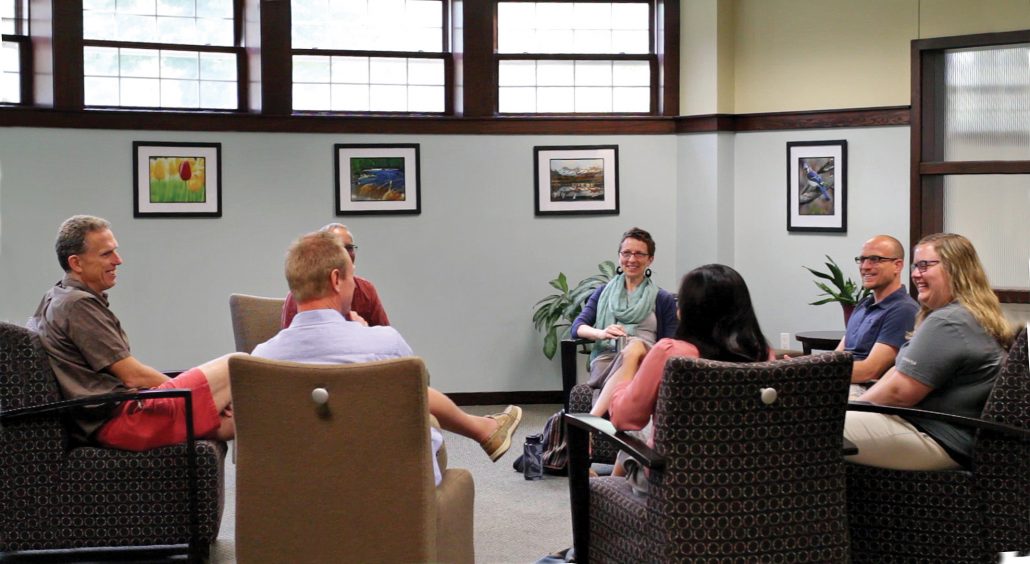 I have been preaching pretty much every Sunday since I graduated from Western in 1986. After so many years, preaching no longer scared me…and that scared me. Recently, two events—a cataclysmic automobile accident involving my son and an unexpected invitation to join a group of preachers—revived my passion for preaching.

In the summer of 2013, my son Andrew, a Hope College student, suffered a traumatic brain injury in an automobile accident that killed his friend, who was driving. Medics removed Andrew from the accident in critical condition. Initially, our prayer was that he would live. As that became likely, we prayed that he would open his eyes and wake up from a coma. Then we prayed for what would be behind his eyes when he opened them. The prognosis was bleak.

After emerging from a sixteen-day coma, Andrew learned how to breathe, speak, eat, walk and live again. It was a time of great challenge and amazing blessing. The church displayed all its glory as people prayed and loved and walked with us through the valley of the shadow of death. I had been on sabbatical at the time of the accident, and I returned to the pulpit with a new sense of the urgency of the gospel. I did not want anybody to live or to die without the hope of Jesus Christ.

My original call to ministry came in the early 1980s when I was working as a bartender in Colorado among some of the most lost and lonely people in the world. As I served and poured and listened, God called, and I entered seminary with a strong passion for evangelism, compelled to learn how to reach the lost and lonely. But something happened in twenty-nine years of church ministry. I became comfortable and lost some of that evangelistic drive. Andrew’s accident and a deep awareness of all who grieve without hope restored my passion.

About that time, Jon Brown and Brian Keepers, two of the great young preachers in the Reformed Church in America, invited me to join one of Western’s Bast Preaching Groups. I figured they wanted me to bring an older pastor’s perspective and experience. I had no idea what was in store for me: an opportunity to learn (and sometimes to unlearn) and get out of some deep ruts. As I gathered with pastor colleagues, I rediscovered the hopes and fears inherent when one steps into the pulpit. It was thrilling.

Our first focus as a group was to dwell in the word. Western, under the leadership of Dr. Timothy Brown, has become a place where the interiorization of a biblical text is the beginning of sermon preparation. Our group committed to memorizing our texts each Sunday. I was preaching through a series titled, “Psalms in the Key of Life.” These were psalms that lifted me through my son’s automobile accident and were rooted in my soul. The work of memorization and speaking them from memory deepened their place in my heart.

For 29 years I approached preaching as a way to exegete culture and brought the Bible to front-page stories from the New York Times or prime-time television. Now, instead of bringing scripture to something, I dwell in the word of God first. This practice brings me to a place I knew I should have been all along. It was a gift to this old dog that congregants noticed right away. In fact, one trusted friend noted the shift and commented, “Something has happened in your preaching. You really seem to be tapping into the power of God.”

Next, the Dwell group focused on craft: how a sermon is developed and written. I have always resisted writing a sermon manuscript and never committed anything to paper until the last minute. Over the years I’ve had a lot of “Saturday night sweats” and sometimes gave Sunday morning messages that expressed great passion but lacked clarity.

I remember seminary debates with Dr. James Cook, professor of New Testament, as I argued that I was better speaking my thoughts rather than writing them. He countered, “If you can’t write it, you aren’t thinking it,” and I disagreed with him for 29 years. Then our group met with Isaac Anderson, a preacher and writer from Kansas City and adjunct professor at Western. As Isaac illustrated his sermon preparation process, I recalled my debate with Dr. Cook. Isaac described a sign above his desk that says: I didn’t know I was going to write that. That simple phrase invited me into the wonder of manuscript writing, from the power of the first phrase to the clarity of its conclusion. I let the Holy Spirit work in me as my words began to flow. Again, a good friend noticed and said a sermon that opened with an attention-grabbing question had been well-crafted.

We recently welcomed twenty new members into the life of Hopewell Reformed Church. I was so pleased that some of the new members transitioned from an AA group in the fellowship hall to worship in the sanctuary. As I experienced the joy in their journeys, I remembered friends from my Colorado bartending days and why God called me to seminary in the first place. My son’s accident scared the life back into my preaching, and my Dwell Group experience refined my craft, teaching this old dog some new tricks.