In the first episode of Season 4, Dr. Richard Mouw discusses the importance of civility and civil dialogue in Evangelical Christianity.

Professor of Ethics and Theology

Last year I was given a treasured gift: time off from teaching and administrative work in order to devote myself to research and writing. My main project was writing a book called Temple and Table, and my wife Lynn and I decided the best context for that work would be in Rome.

I contacted the Waldensian Theological Seminary in Rome (If you are an Italian Protestant, you are probably a Waldensian). The dean of the seminary, Fulvio Ferrario, opened the arms of his institution, offered an apartment we could rent, and kindly helped us navigate the mysteries of Italian bureaucracy to secure a visa for our time there.

What a rich context in which to research, write, and live! 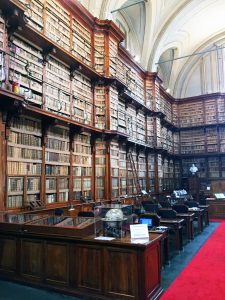 My day would begin with a commute by foot of about 25 minutes. After breakfast, sometimes shared with the students at the Waldensian seminary, I’d walk across the Bernini Bridge of Angels with its view of St. Peter’s Cathedral, past the Pantheon and the Trevi Fountain to the “Greg”—the Pontifical Gregorian University. The Gregoriana is a world-renowned center of learning with deep resources. I would often pop in my ear-buds and study Italian on the way, or simply take in the sights and sounds of Rome. Once I arrived, I would check my backpack into a locker, bring my books and computer with me, and find a desk alongside about 200 other people, mostly Roman Catholic men and women from around the world, and get to work.

When lunch time came, some days I would find Johannes, a kind, bearded, grey-robed Austrian monk in his 40s working on his Ph.D., who became my friend. We’d grab lunch at the café and talk about American or Italian politics, Roman Catholic youth ministry in Austria, what it is like to be a monk, the finer points of his work on the theology of Aquinas, or my own project.

Back to work, then home at 5—when Lynn and I would meet with our Italian tutor, Marta, or explore some new church, museum, or Roman ruin before dinner at 9pm. When in Rome…

Every few weeks a group called “Churches Together in Rome” would meet. Pastors, priests, and lay leaders from the English-speaking churches of the city—spanning from Pentecostal to Methodist to Roman Catholic—created this group and regularly gather for fellowship and projects. They invited me to join them during the year. During our meetings, we read and talked our way through the ecumenical document, From Conflict to Communion, a commemoration of the 500th anniversary of the Reformation, written jointly by Lutherans and Catholics. On some weekends, I worked side by side in an ecumenical garden with Russell, a Franciscan monk doing important work for the order in Rome, and Dana, an Anglican priest. 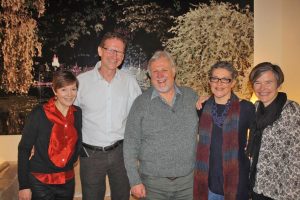 What a gift to be part of this group, talking with these brothers and sisters from so many different backgrounds, seeing in one another signs of hope of the healing of the deep wounds of division within Christianity …right there in the epicenter of the Roman Catholic Church.

I often tell people that as you walk the streets of Rome it is as if 25 centuries of history are constantly whispering to you. It shapes your imagination. It shapes the conversations you have with people. Part of my writing project involves trying to understand more deeply how the early Christian church imagined what was happening as they celebrated the Eucharist together. Physical evidence of that is found in the catacombs surrounding Rome and in the beautiful mosaics that decorate some of the oldest surviving Christian church buildings in the world. Experiencing those places while doing my work was a deeply moving and formative experience. 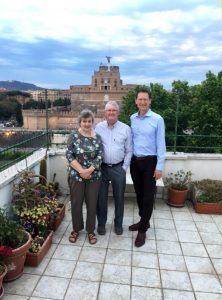 David with Rev. Dr. Tim and Angela Macquibin. Tim is the leader of Churches Together in Rome and head of the Methodist Ecumenical Office.

Writing about the Eucharist while experiencing contemporary Roman culture was also formative. I felt the divisions within Christianity and ecumenical possibilities in a new way, watched from afar the growing divisions within the United States, saw firsthand the refugee crisis that affects Italy more than most countries, watched the papacy of Francis and the growing secularism of Europe unfold at the same time, tasted the beauty of a carefully prepared Roman meal, saw what Protestantism means in a place where it is a minority, and shared meals and conversations with refugees, monks, deans from English universities, ambassadors from Nigeria, ecumenical delegates, and artists in residence. Rome is a global crossroads and was an immensely fertile ground for contemplating what the central meanings of Eucharist have to say to us today.

Rome was a gift, a wonderful place in which to do my work. I have nearly completed my writing project, Temple and Table: The Jewish Roots of the Christian Eucharist (forthcoming from Eerdmans), and I have high hopes that it will be a helpful contribution to the church and academy. But Rome also worked on me. It broadened and deepened my understanding of Christianity and the place of Protestantism in it, of the Eucharist, and of this chaotic but lovely world that God created and continues to hold in his hands.

David Stubbs teaches ethics and theology at Western and is available to share more about Temple and Table in churches and other settings. In his book he identifies five central meanings of the Eucharist and draws bold lines of connection from the Jewish Temple to the contemporary church. He also offers a series for churches, “Walking in the Way: Christian Ethics for Everyday Christians.” Contact him at 616-392-8555, x124.