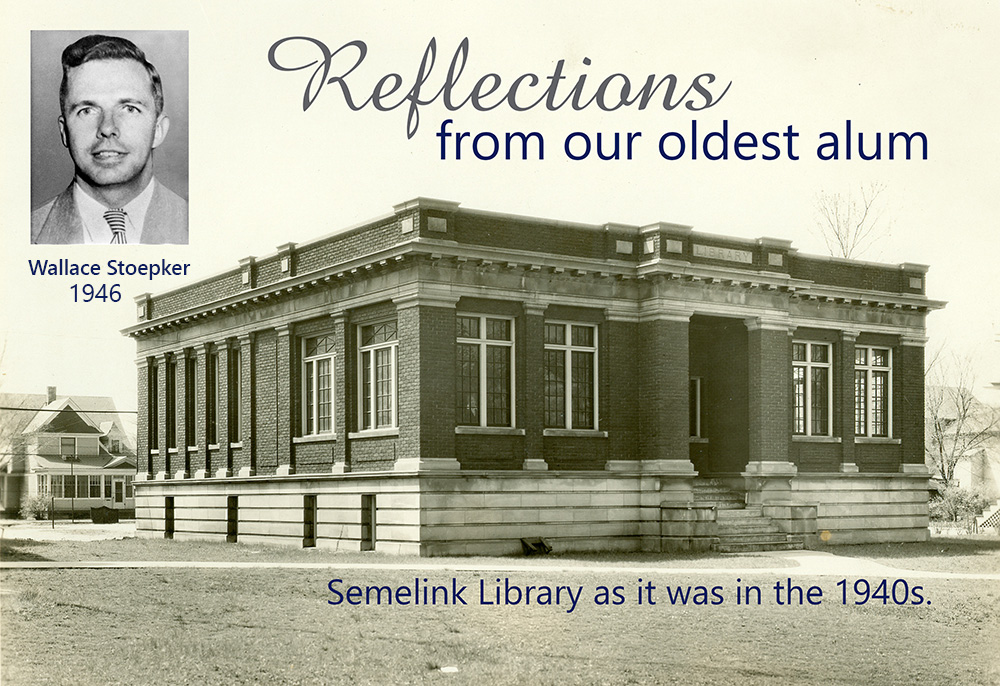 by Rev. Wallace Stoepker
Class of 1946

Each time The Commons comes out, I read it with great interest. What an extensive program the seminary has now with a variety of faculty and students! When I graduated from seminary in 1946, we had 30 students and six male faculty, and that was the entire school.

I recall when I was a student pastor for a summer on the western prairies of Alberta, Canada, during World War II, gasoline and cars were scarce, so I was provided with a horse to do my church work. Is there another pastor in the RCA who had to use a horse to do visitation? I first had to catch the horse in a 40 acre pasture and saddle it!

During my three years at seminary, tuition was free to students, as well as our single dorm rooms in Zwemer Hall. My expenses for my last year amounted to $200-300, and I graduated debt free.

However, my first salary in a small western New York church was only $1,700 for the year. Newly married, Dorothy and I discovered what poverty was like. We were so poor that I took the janitor’s job also at $200 per year. At the parsonage I shoveled coal to keep the furnace warm and there were about 30 grass snakes in the very damp basement, plus rats and lots of mice. There were even mice living in the piano, eating the glue.

Our 1.5 volt battery phone had to be cranked to use, and we had eleven families on the same line. All of our phones rang any time one of us got a phone call. No privacy!

We celebrated the 100th anniversary of the church when we were there. One hundred years old and still no inside bathroom. You had to wade through three feet of snow to use the outhouse.

I begged to have a sign with the name of the church on the outside of the building, and the response was, “What for? Everyone knows what church it is.”

Unlike today, at that time the church had no interest in missions, benevolences or social problems. When I suggested we support some, the response was, “We take care of ourselves. Let others take care of themselves.”

Back then, churches were not always so accepting of differences. A young man from the church wanted to marry a girl who came from a non-Christian, broken home. His parents were against it and refused to come to the wedding, as did the rest of the congregation. Dorothy and I made the service as meaningful as possible and had them over to the parsonage for wedding cake. Regardless of their treatment at the hands of the congregation, both of them came to church faithfully, and the wife took several leadership roles. They have been married 60 years now and still write us every Christmas.

Dorothy recalls several weddings I performed over the years that were especially memorable. In one, the wedding party came late and the organist never did show up, so Dorothy had to leave our small children in the pew and fill in. Afterward, there was a police car waiting outside. Turns out the organist was in trouble with the law…which explains why she didn’t show up!

At another, the bride was already pregnant. Some of you may not know this song, but she wanted it sung in the sanctuary at their wedding: “You Made Me Love You. I Didn’t Want to Do it.” I talked her out of that.

I am now 95, and my wife is 94. We are both quite well and live in our own home. In fact, my eyesight is excellent and I feel so good that I bought a brand new car in 2015. A friend of my son said that was the biggest act of optimism he had heard of in a long time.

The children of Wally and Dorothy established a student scholarship in honor of their parents’ 70th wedding anniversary in 2016. Here they are pictured at the scholarship luncheon with the first recipient of the scholarship, first-year student Aric Balk.

Episode 2.9: Edith Humphrey and John Thompson on Tradition and the Centrality... May 8, 2017 – Commencement and Alumni Day