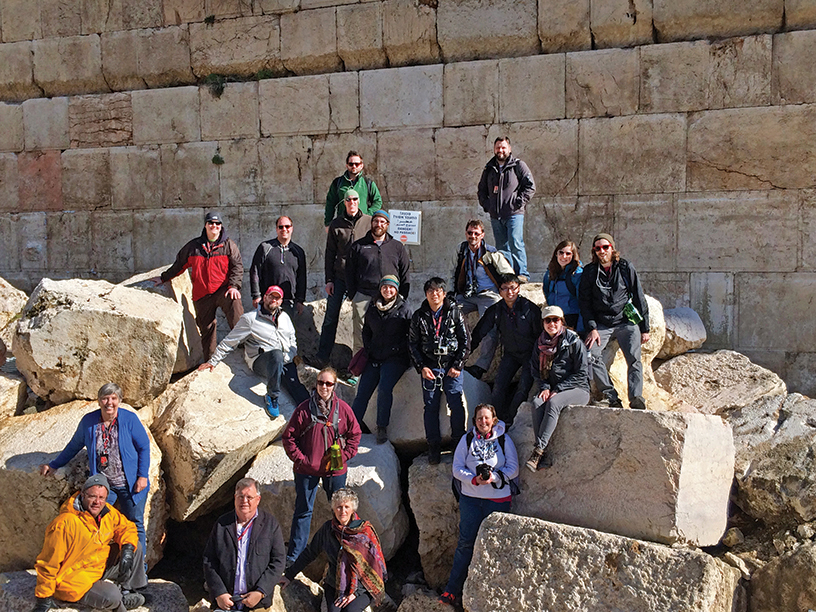 I have dreamed of going to Israel since I was 15 years old. Thanks to the Intercultural Immersion program of WTS, that dream came true in January. Led by our guides, RCA missionaries Marlin and Sally Vis, our group of jet-lagged—but excited—seminarians left the plane in Tel Aviv, donned warmer clothes, and hit the ground running.

For the next several days, we trekked to and through as many sites as the weather and practical logistics would allow, both in the Galilee region and in and around Jerusalem. Eagerly and intentionally absorbing the view from the hill, the unevenness of the ground, the cold of the stone, the beauty of the architecture, the undeniability of the ancient Roman power, we were consistently challenged to think what that culture brings to biblical teaching, to remember that knowledge of Jesus and the gospel must carry in it a deep understanding of Jesus’ humanity and the culture in which he lived.

I cannot adequately explain the different feel of the land. There is a continuity we touched momentarily through the stones and ruins that inform millennia of culture and conflict. We felt it when we climbed to the caves in Mt. Arbel and heard the story of the slaughter there. We saw it in B’et She’an, with its Greek-influenced layout and immensity, a foreign template for power demanding recognition. We saw it at Herodium, the five-story palace fortress looming from its perch just outside Bethlehem. We saw it in the wall and checkpoints and red tile roofs of Jewish settlements sprawling down the mountains in the West Bank. We heard it in the voices of the people we met and grew to love.

Our first night in Jerusalem marked a shift of focus from the past to the present and future. In those next few days, we traveled to the West Bank to Hebron, guided by a hospitable, gentle Muslim woman, experiencing more freedom in our movement than she was allowed.

We toured Yad Veshem (the Holocaust memorial) while winding through Israeli military training groups. We listened to the heart-wrenching stories of Muslim and Jewish daughters killed by the enemy, saw first-hand the non-violent resistance of Palestinian Christians at the Tent of Nations farm, visited a settlement, meeting with two Jewish settlers, attended a lecture by Dr. Salim Munayer at Bethlehem Bible College, and were welcomed into the homes of Palestinian Christian families, who shared their stories of life in this land of occupation.

Western media falls short in giving us the whole picture. Consistently, we heard this plea: “Tell our story. Come back. Bring people with you.”

The politics are harsh. The fear is palpable. It is easy to claim sole ownership of a connection to the land, to assign blame, to take sides. While governments stake out political positions, individual Americans are free—free to seek peace, not merely cease-fire, to join hands with any and all who seek justice. We cannot fix the problems or force solutions, but can walk alongside, lift up, and do the work of Jesus in his homeland.

I hope to return someday and bring friends along to meet the people and learn their stories. Meanwhile, I will keep listening to the stories, the living history of the land. Regardless of whether I am able to return, the cycle of power and oppression, wealth and poverty played out over thousands of years in Israel/Palestine serves as a clarion call to address injustice wherever it is met, whether that is in the Middle East or the American Midwest. We are called to do the work of Jesus in our own homeland as well.