While a Reformation unfolded in Germany, Switzerland, and throughout Europe in the early decades of the 16th century, a woman was born 1000 miles south in Avila, Spain, on the bank of the Rio Adaja, just west of Madrid. Today, we know her as St. Teresa of Avila, a woman who started a reform movement centered around living according to the Gospels and committed to discovering the hope, beauty, and intimacy of God’s life within us.

I met her in the summer of 1997 while studying Christian spirituality with the theologian Alistair McGrath. He spoke of her as if she were a friend, and it was clear to me, even at the age of 27, that I’d need to get to know her. That sparked a curiosity about the Spanish Carmelite tradition, including St. John of the Cross, author of The Dark Night of the Soul. Teresa and John’s work created space for doubt and disorientation in my life of faith but offered reminders that God holds us even in these spaces of disruption. They became companions in my pastoral and counseling work. I was so captivated by Teresa’s vision of life in God that I began writing about it five years ago, but black-and-white words on a page couldn’t capture what I saw in my mind’s vivid technicolor imagination. So, I set aside the 40,000 words I’d written and didn’t return until last summer.

By last summer, a book I’d written called When Narcissism Comes to Church had been around for nearly a year and a half, and with that, a deluge of conversation and correspondence around issues of religious trauma, church scandal, clergy abuse, and more. Every day, I’d expect to see another 10-20 emails with stories of pain and powerlessness. Soon enough, my soul felt heavy, and my cynicism oozed over in conversations. I knew I had to find my way to the depths of God and the horizon of hope again. Over a coffee with a creative friend named Andrew, I asked if he could put my words about Teresa to compelling music and artful visuals, and we began filming Wild Country of the Heart: Navigating the Seasons of the Spiritual Journey with St. Teresa, a 70-minute journey into the seven dwellings of her most beloved work, The Interior Castle. 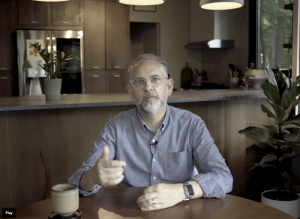 Still image from Wild Country of the Heart

Teresa witnessed a church in crisis. Though 1,000 miles south of the Reformation epicenter, she felt its reverberations. Within her own church and monastic movement, she witnessed ritualism and apathy, performative practices of the Christian life without heart. She participated in it all until, at age 39, her eyes were opened to see her sufferings in Jesus, her life transformed by God’s solidarity amidst her pain. Now, she couldn’t help but name the crisis and pave a hopeful pathway forward that we desperately need.

The church in North America is facing massive challenges today, if not crises. The late spiritual theologian Phyllis Tickle noted that about every 500 years, the church seems to experience a “giant rummage sale,” a reckoning with old and tired forms of religiosity and even abusive practices. And, it seems we’re at that 500-year mark again. In my work, I sit with survivors of abuse whose trauma burdens them so greatly that they wonder if they can find their way to church again. Polling through Gallup shows a precipitous decline in trust and confidence in religious institutions, from 60% in 2001 to 37% today.

I created Wild Country of the Heart to offer hope through the compelling story of one who could’ve given herself up. A sufferer of trauma, burdened by chronic pain, and faced with sexism and racism (for her Jewish family background), Teresa’s experiences mirror many of ours. Indeed, in the patriarchal Spain of her day, clergy-sanctioned domestic abuse threatened the dignity of women and wives, in particular. She had every reason to seethe in anger, to resign to cynicism.

“We at Western Theological Seminary seek to reckon responsibly with the ecclesial challenges but also prepare women and men to be hopeful ambassadors of God’s shalom. I pray that the film plays a small part in that hopeful way forward.”

And yet, she created a hopeful community, anchored in the Gospels and aimed at forming women and men for life in God. She wrote a magnificent work, The Interior Castle, offering a way forward through our disorientation, doubts, and even deconstruction, into hope, beauty, dignity, and intimacy with God. That’s a story worth telling today, as we at Western Theological Seminary seek to reckon responsibly with the ecclesial challenges but also prepare women and men to be hopeful ambassadors of God’s shalom. I pray that the film plays a small part in that hopeful way forward.

Everything in the Neighborhood Has Changed, Except for the Church The 5 Things You Need for Your Seminary Application