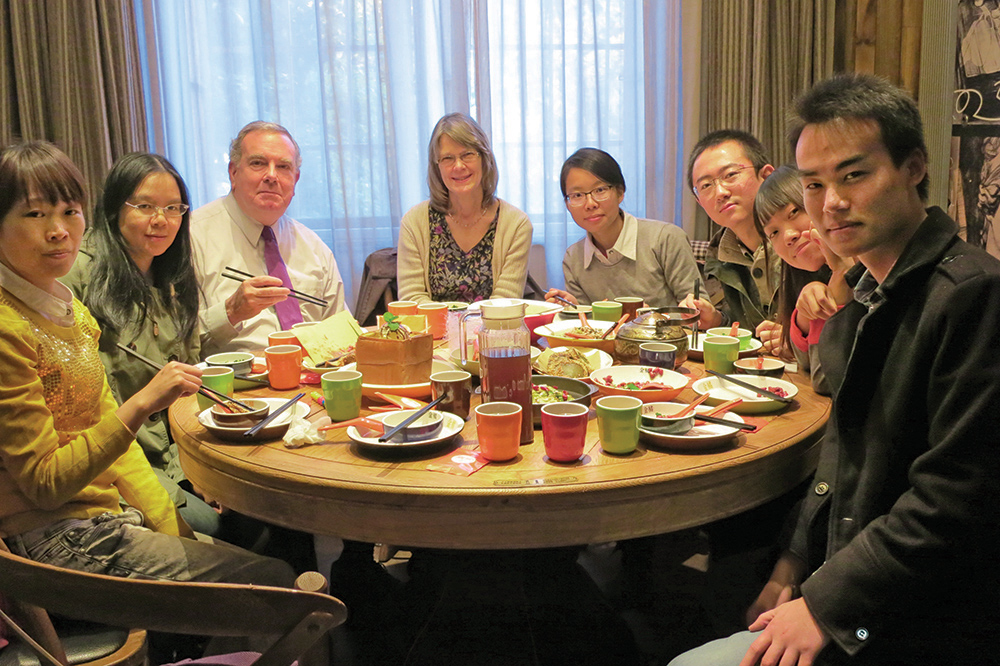 According to an article in the Financial Times, “The Rise of Christianity in China,” membership in the church there is now greater than membership in the Communist Party. By 2030, China likely will have more practicing Christians than the U.S.A.

Professor of New Testament Robert Van Voorst and his wife, Mary, immersed themselves in this surprising new environment for two weeks last November. Dr. Van Voorst was invited to be a “Distinguished Overseas Visiting Scholar” at Zhejiang University in Hangzhou, where the government sponsors a doctoral program in Christianity Studies. The Chinese government paid for the entire trip.

Former WTS student Grace Hui-Liang (Th.M. 2005) coordinated the visit. She is a professor at Zhejiang University and author of three books on the history of Bible interpretation in China.

Bob taught 12 students from Zhejiang’s Ph.D. program in Christianity. Many of these young scholars will get six months of paid study in the West as they write their dissertations. When they finish, they will be placed as Christian religious studies scholars in various Chinese universities.

The days fell into a regular rhythm:  lectures and advising students in the mornings and then sightseeing in the afternoon. The students showed their American professor and his wife the sights of Hangzhou—the university, temples, and the beautiful West Lake. The students were very respectful, calling Mary by her first name at her request, but never dreaming of calling their professor “Bob.”

Bob and Mary visited a local house church and soon found out that “house church” simply means it is not one of the government’s recognized churches.

“At times you could hear the whole room full of whispered prayers,” Bob reflects. “It was quite beautiful.”

The men sat on one side and the women on the other—but a woman preached the sermon.

Following the service, the pastors took Bob and Mary out for lunch, asking difficult questions about the religious futures of the U.S. and China, the rise of secularism in the U.S., and whether there would be any hope for the world if the U.S. gives up its role of promoting freedom.

Asked for his thoughts on avoiding persecution but still spreading the gospel,  Bob reached into the New Testament. “If you suffer for being a Christian, God will bless you,” he told them. “But if you suffer because you break God’s law, then you should accept your punishment as just.”

The house churches are spreading very rapidly as more people come to faith.

“Frankly, the church in China is doing very well now,” Bob says, “but Western Christians don’t realize that the Chinese government is both encouraging and suppressive.”

The Chinese government sponsors the largest Bible printing operation in the world. It has printed 125 million copies of the Bible, given to churches for use and distribution—even house churches. The government would rather have a mainstream form of Christianity influenced by the Bible than to have Christian cults.

However, the government remains wary of any movement becoming too large, and as Christianity grows among intellectuals and business leaders, the government tries to control that growth.

“As Tertullian said around A.D. 200, ‘The blood of the martyrs is the seed of the church,’ Bob remarks. “The more you try to suppress faith, the more the faith grows.”

Professor Van Voorst hopes to participate again at Zhejiang University. He believes both the academy and the church are going to be important for Christianity in China.

“It’s simply amazing that a political system pledged to atheism would sponsor the high-level study and teaching of Christianity,” he says. “We may wonder why, but we thank God that such research and teaching are being done.”

Treading Jesus’ Homeland For the Love of Preaching