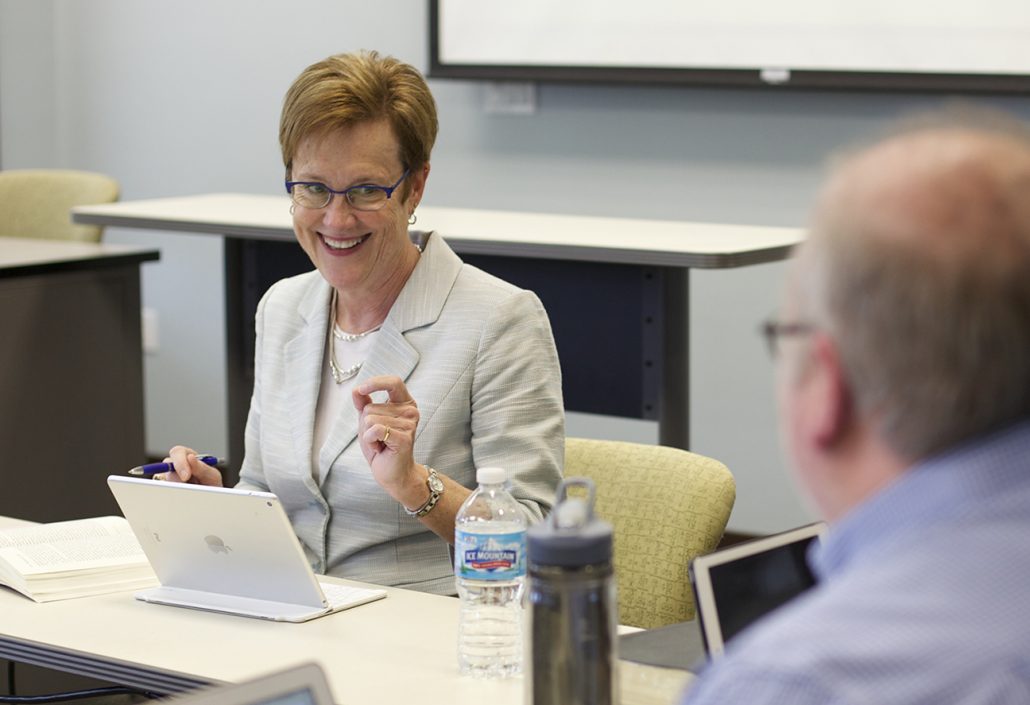 Western Theological Seminary announces that Dr. Leanne Van Dyk, vice president for academic affairs, has been chosen by Columbia Theological Seminary in Decatur, GA as their next president. Dr. Van Dyk will complete the school year at Western and take up her new responsibilities at Columbia the end of June. She succeeds Columbia’s ninth president, The Rev. Dr. Stephen (Steve) A. Hayner, who passed away in January after a year’s illness. Columbia was founded in 1828 as a seminary of the Presbyterian Church (USA). With a faculty of 30, it has 350 students in five degree programs, all offered in-residence. The 57-acre campus is located six miles from downtown Atlanta.

Dr. Van Dyk arrived at Western Theological Seminary in 1998, first teaching in the area of Reformed theology and then moving into administrative roles such as dean of the faculty (2002-05), academic dean (2005-15), and finally the vice president of academic affairs (2006-15).

In those years of academic administration, Dr. Van Dyk increased the quality of Western’s distance learning degree program, began a new Master of Arts degree, assisted in the partnership with the Newbigin House of Studies (San Francisco), headed up the re-accreditation process for the school (done every 10 years), implemented an assessment process for student learning, and led the Faculty Fellow program in which racial-ethnic scholars are brought into the WTS community to teach while working on their PhDs.

When asked about her favorite accomplishment, Dr. Van Dyk says, “I am most pleased with my work chairing ten faculty search committees and bringing marvelous new faculty colleagues to the seminary.”

“Even though women were not at that time welcomed into ordained ministry in the Christian Reformed Church, I was convinced that I was obeying a call from God,” she says. “I am so grateful that my call has led me to rich and fruitful ministries in theological education.”

Van Dyk was ordained in 2007 in the Presbyterian Church (USA). Her ordination was transferred to the Reformed Church in America in 2009.

Her years in San Francisco, where she served on the faculty of the San Francisco Theological Seminary from 1992-98, sharpened her focus on the issues of cultural diversity that face the church today. She gave Western an excitement for the rich resources within the Reformed tradition for speaking theologically across cultural and religious boundaries. She cares deeply about racial-ethnic diversity and is pleased that Columbia Theological Seminary has grown remarkably in recent years in that area.

“I am eager to serve Columbia as president and lead them to continue to live into their mission,” Dr. Van Dyk says.

“Columbia Theological Seminary’s great gain is Western Theological Seminary’s deep loss,” says WTS President Timothy Brown. “Leanne has given our school boundless energy and lavish joy as she has guided our academic well-being with remarkable wisdom. We all wish she wasn’t leaving but clearly understand why Columbia has chosen her. We are mighty proud of her and pledge to her our abiding love and continuing prayers!”