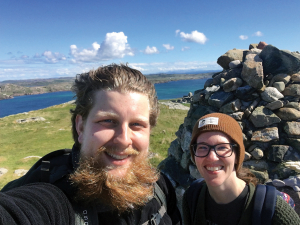 Jackson Nickolay with wife & WTS alumna Hannah, hiking on the Isle of Iona.

We had just hiked over 12 miles.

In the excited rush of having finally arrived on the Isle of Iona—a Scottish island laden with personal and spiritual significance—my wife Hannah and I had hiked the length of the island… three times over. We were exhausted, the type which prompts a heightened sense of attention to the way the seams of your jeans have been rubbing your legs the wrong way and informs you that the laces of your boots were given one pull too many when you put them on. As we neared our bed and breakfast, nothing sounded better than curling up with a book and slowly falling to sleep.

But the light was calling to me.

Light is a big deal on Iona. If you happen to wander your way into one of the few bookshops on the small island, you will find a variety of books about the essence of the light there. These books range from the respectably reverent to the magically mystical. Some marvel at the beauty God has bestowed upon the early morning light. Others speak of the light as a doorway into heaven itself and claim Iona as one of the few thin spaces on earth where heaven and earth are separated by the narrowest beam of light.

And that light was calling me.

With Hannah making the wise choice to rest after a long day’s hike, I set out to find the horizon. The sound of my tired feet dully testified to my eagerness to reach the hills in time to see the sunset, but my excitement turned to dismay as I realized I had farther to go than I thought. The sun was sinking, and fast. My pace quickened toward a hill and through a herd of sheep that seemed justifiably startled by this interloper moving a bit too quickly in the failing light.

My body cried out to me. Any rational person would have stopped miles ago. Why was I pushing myself so hard?

I needed this sunset. Having recently followed a call to attend seminary—a path I could not have predicted even six months prior—I found myself searching for a sign, a divine nod, an assurance that I was on the right path, that I had indeed received a call, and where I was going God would be with me.

I got to the top of the hill and looked toward the sea, only to see a larger hill just offshore, right in the way of the sunset… my heart sank. The light was fading, and there wasn’t enough time to move to another of the many hills. Defeated, I turned around, looking for a place to sit for a moment and catch my breath.

As I turned, I saw eyes gazing back at me. A lamb had poked its head around the side of a grassy knoll a little way to the north, its white fleece bathed in ethereal sunset light.

Hope kindled. My tired legs drove on once more as I stepped toward the lamb and into the light of the just setting sun.

The clouds didn’t part, there was no angel chorus, and no ladder descended from the sky. But as I sat there tired in body and hungry in soul, I saw the air itself suffused with the sun’s shimmering light, the hills of Iona aglow in dark purple silhouette, and the sea illuminated with a path to the horizon. Respectable reverence can call it what it wants. As for myself, I will say that as I sat there on a hill with the lamb, the thin place quickened, the veil opened, and I saw Iona cast in heaven’s light.       —JN