After over three and a half decades of faithful and distinguished years serving at Western Theological Seminary, Norm Donkersloot retired from his role as the Vice President of Finance on March 15, 2022. 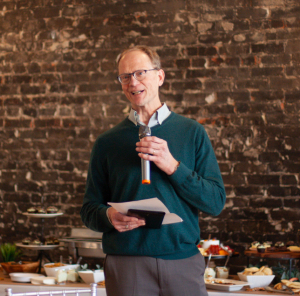 Norm Donkersloot, reflecting on 35 years of service to WTS at the celebration of his retirement.

As the Vice President of Finance, Norm managed Western’s finances for 35 fiscal years, counseled four presidents, prepared 34 annual budgets, and trained countless board members. He stewarded the seminary’s budget, expenses, and investments while holding Western’s mission at heart to increase the seminary’s impact on the church and its leaders. Additionally, as a leadership team member, Norm’s careful guidance has helped to provide a strong foundation for achieving the seminary’s goals and strategic plans.
When reflecting on the start of his career at WTS, Norm envisioned staying at the seminary for five to seven years. But the mission of the seminary inspired him to stay for over three decades. Norm shares, “I believe in the church and found that Western fits my heart. I believe in our students. I love their optimism and idealism. I love when students bare their souls when they preach for the first time. It’s a privilege having students sit across my desk and present their housing needs in Holland while sharing memories of their hometowns.” 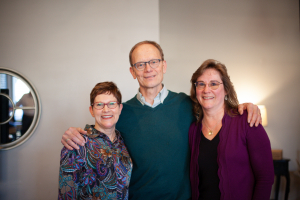 Norm’s impact and contribution to the overall growth and health of the seminary are impossible to quantify. Rayetta Perez, Director of Administration and Human Resources, friend, and colleague of Norm’s for 21 years, shares that “WTS enrollment and programs have grown partly because of Norm’s dedicated management of financial resources. He has shepherded the growth of The Bridge, the seminary’s fair trade store, and supported the Community Kitchen, the on-campus hub for a local agency that serves meals to those in need.”

In addition to this, he has played a lead role in overseeing several building renovations and expansion projects, such as the DeWitt family Red Bricks student housing, DeWitt Theological Center and Burggraaff Atrium, Mulder Chapel, The Ralph and Cheryl Schregardus Friendship House, and most recently, the Jack and Mary DeWitt Learning Center, Cook Library, and building expansion. “He loves to be part of the seminary’s growth, from digging and demolition to design and details,” adds Perez.

Andy Bast, Director of Development, adds, “There is not an inch of this Seminary that Norm has not touched and impacted.”

Dennis Voskuil, former president of WTS (1994-2008) and Professor Emeritus of Church History, shares, “Throughout my time working with Norm, I witnessed him become an increasingly central part of the community, and many students came to know him well. He was always willing to participate, and I couldn’t think of a better team player.” 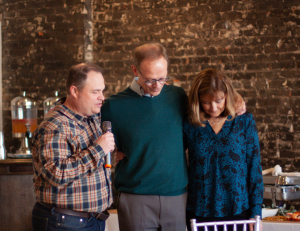 WTS Professor Winn Collier prayed a blessing over Norm with his wife, Anna, at the celebration of Norm’s retirement.

“When I started at the seminary,” said Donkersloot, “it was essentially a residential school that served students from the Midwest who wanted to be preachers or church educators. [I’ve watched] the residential program grow and stabilize and witness distance-learning programs develop. This change has made it possible for the seminary to serve students from coast-to-coast, and as far away as Brazil.”

Upon retirement, Norm is looking forward to traveling with his wife to visit his daughters in New York and Utah. He also plans to volunteer with Habitat for Humanity and get off his desk chair and onto a bike seat as much as possible.

Jonathan Dockery succeeded Norm as the Chief Financial Officer and Vice President of Finance. You can read more about him here.