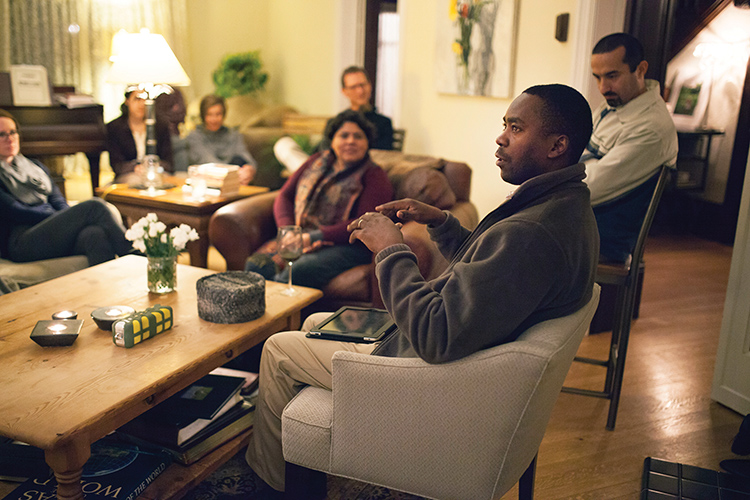 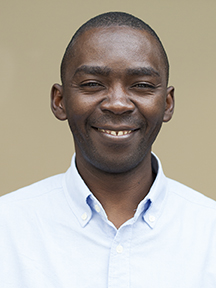 Master of Theology student Rev. Godfrey Kyome has lived on the streets of Uganda, has worked at a home for blind youth, was ordained in the Anglican church, and now serves as the assistant executive director for Words of Hope Uganda radio ministry.

“My life has witnessed the grace, presence, and providence of the Lord,” says Godfrey.

Godfrey’s father was a hard man and mistreated his mother. Rather than stay under his father’s roof, 12-year-old Godfrey took to the street shortly after primary school.

One night he ended up sleeping on a church pew. When he woke up, people had filled the church and were worshipping. He immediately sat up, thinking, “I should be worshipping, too, not sleeping!” He began spending his days looking for churches to be part of.

“Life on the street away from my family was a time that God used to prepare me for my ministry,” he observes. “Like a prodigal son, the time came when I thought, ‘I shouldn’t be living this kind of life.’”

Eventually he moved in with an aunt who encouraged him to go back to school.

Secondary school was a turning point for Godfrey. As a teenager, he began organizing small-scale mission projects in different schools and found local pastors interested in discipling young people. One of those pastors was Bishop Stephen Kaziimba (Th.M. ’03, D.Min. ’07). Rev. Dr. Kaziimba became a mentor for Godfrey, along with Captain Titus Baraka (Th.M. ’02).

“They are always helping insignificant people see the gifts they can use in the community and the church,” he says.

Godfrey went on to Uganda Christian University, where he earned a bachelors degree in social work and administration.

When he was on the street, in desperate times he had bargained with God, promising to serve him if he would answer his prayers. When he got his degree in social work, he followed his passion to work with disabled youth and volunteered at a home for the blind. He thought, “This is what I’m going to do. It’s enough for God.” But God convicted him that he had made a pledge to serve Him, leading Godfrey to complete a Master of Divinity degree in Uganda and seek ordination in the Anglican church.

Many of Godfrey’s mentors came through Western Theological Seminary, and it became a dream for him to study here as well. Last year WTS President Timothy Brown and Words of Hope President David Bast took a trip to Uganda, and Godfrey was their interpreter. He applied for the Master of Theology (Th.M.) program and was accepted.

“Being here is a dream come true,” he says. “It’s a confirmation of what God wants me to do in Uganda.”

Godfrey’s research centers on congregational transformation through leadership. He is interested in how a leader can use teamwork to transform his or her community by recognizing and using different gifts, talents, and abilities in the congregation.

“I believe if all people are given an opportunity to participate in church or in ministry, there will always be a tremendous transformation,” he says.

His current work as assistant executive director of Words of Hope Uganda allows him to connect people and help them work together. He organizes Words of Hope’s radio ministry in the country’s fifteen dioceses to make sure they are airing quality material. On his radio program on Saturday mornings he records sermons for them to use. He also organizes listener’s conferences for those who wish to share their testimonies.

He attributes much of his success to his mother, who prayed for him from the time he was a boy.

“I remember nights when I was sleeping… she would put her hands on me and pray for me, and I kept pushing them away because they were so cold!” he recalls. “But I am what I am because of the knees of that woman.”

Godfrey is thoroughly enjoying his time at WTS.

“It’s such an encouraging environment as I meet people from different areas of the world, like India and China,” he says. “We share ideas in the Th.M. program, and I have learned so many things that are happening in the church around the world.”

The program is also helping him to look inward and know himself more deeply.

“You think wide. You think like a scholar. And I believe a good pastor should be a scholar,” he says. “By God’s grace, when I go back I would love to have a leadership conference, especially in the Mityana diocese, where we have a low level of education,” he says. “I want to see how we can equip them with this kind of knowledge in leadership and discipleship, but also how I can advance our ministry doing discipleship through media. Whatever God brings my way, I will do it for the glory of the Kingdom.”

Moving Toward a Better Theology of Disability Keep your Hat on!- Update from VP Jeff Munroe