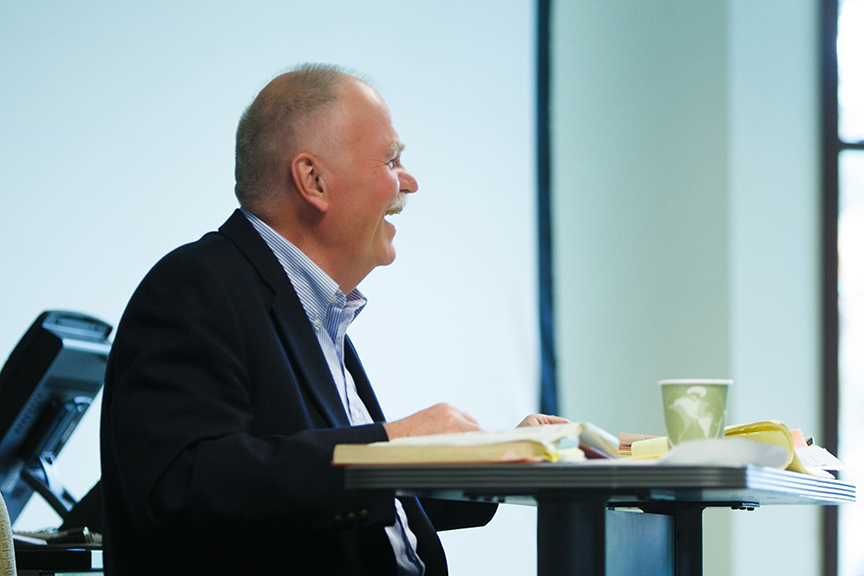 “God has a way of guiding us that we don’t fully understand until we look back on it,” says Dr. Dennis Voskuil, recipient of Western’s 2015 Distinguished Alum Award. In 1962, severing a tendon on his finger sidelined Dennis from the University of Wisconsin football team and changed the direction of his life. By the next season he knew he wouldn’t make the starting team, so, although he loved the game, he ended his football career and focused more intently on his studies. This led him eventually to Western Theological Seminary and a Ph.D. program at Harvard University.

Dennis came from a high energy, highly competitive family, where “my father’s top four priorities were faith, family, sports, and academics—and at times the order got skewed,” he says. His parents, siblings, and their spouses all became teachers in one way or another and were so immersed in the humanities that “when I became a parent, I didn’t even know how to raise children who would be interested in science!” 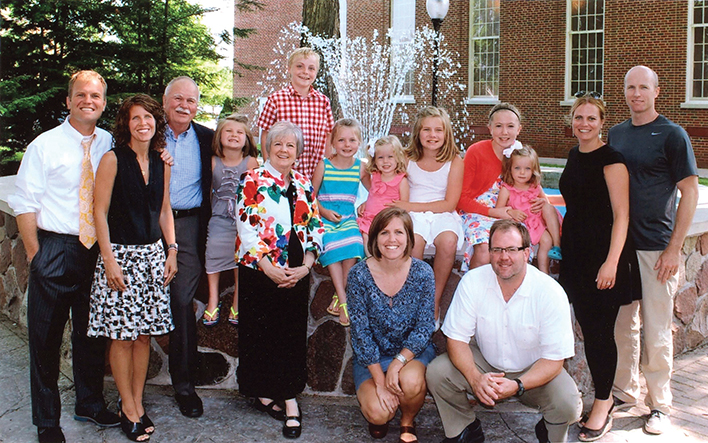 Living in a rural community in northwest Wisconsin, Dennis was greatly influenced by his parents, grandparents, and the people around him showing how important faith was to them. As a very shy second-grader, his mother had to sit with him in Sunday school, and yet his grandfather noted that Dennis showed more interest in Christianity than most seven year olds. “Dennis,” he asked one day, “Why don’t you become a pastor?”

Indeed, Dennis saw himself as someone who would eventually serve the church, but as a college student he prepared to become an American history teacher. However, one day late in his senior year as he was scraping dirty dishes at his job in the university’s Student Union, he realized it just didn’t seem important enough. He couldn’t spend his time writing about American history without any connection to Christian faith.

By that time he was married to Betty, the sparkling, energetic girl who had burst into his life in fifth grade, promptly out-spelling him in a school spelling bee (“I didn’t like that,” he says). By seventh grade they were a couple, and right before their senior year of college they got married.

When Dennis told Betty he wanted to go to seminary, she was very supportive. They moved to Holland and she immediately got a job teaching home economics. Dennis began WTS in 1966 as a student in the very first summer Greek class, taught by Dr. Richard Oudersluys. After his first year in seminary, an internship at Midland Reformed Church with Rev. Gary Wilterdink gave Dennis real life lessons in preaching and pastoral work. For the next two years of seminary, he assisted at Central Reformed Church in Muskegon.

At the encouragement of the WTS faculty, Dennis headed to Harvard and earned his Ph.D. in the study of religion. However, after graduating in 1974, he was unable to find an open teaching position at a college or university. Again, God guided him as he came very close to accepting a chaplain position at the elite Exeter Academy boarding school in New Hampshire. Instead, at the recommendation of Dr. Gene Osterhaven, Dennis interviewed with Trinity Reformed Church in Kalamazoo, MI.

“They were skeptical of me!” he says. “I was a 30 year old with a Ph.D. who had never been out of school.” Yet, they offered him the position. When he, Betty, and their children arrived in Kalamazoo, the first thing Dennis did was to find out where the church team was playing softball that night. He grabbed his mitt, drove to the field, and said, “Hi, I’m your new pastor, do you have enough players?” He played second base that night, and soon the church realized what a down to earth guy he was.

At Trinity, Dennis came to realize that his personal faith commitment and giving his life to others meant more to people than a Harvard education. In the first few months, he performed 12 funerals—a blessing in disguise, giving him the chance to get to know so many families. He poured himself into the ministry, calling on everyone, and soon the congregation began to thrive.

“They nurtured me and cared for me,” he reflects. “They taught me so much about faith and the church.” Three years later when he had to announce he was taking a teaching position at Hope College, he broke down in tears because it was so painful to leave them. 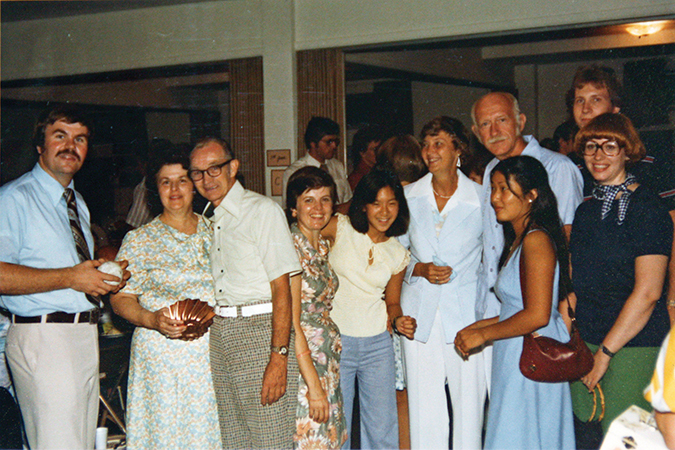 Yet teaching was in his blood. He joined the Religion Department at Hope in 1977, and “I took to it like a pig to mud!” he says. He savored every moment. When he arrived, he had no lectures prepared and had to work until 2 or 3 in the morning to keep up with teaching two new classes every semester. Still, he loved everything about it—the students, the community, even the workload. He was happy and had no desire to leave.

After being at Hope eight years, Dennis was chosen as a final candidate to lead Western Theological Seminary. Betty was serving at the denomination and believed the seminary needed him. He was torn but couldn’t bring himself to leave the job he loved. He withdrew his candidacy.

During the next nine years, two especially formative things happened. First, he took over as interim pastor for two years at Third Reformed Church during a difficult time for the congregation, getting his “feet back in it.” There he realized how important training pastors and working directly with church leadership was. Second, he was a candidate for the presidency of Hope, and through the interview process, led by Max DePree, he learned he had gifts for institutional leadership.

When the chance rose again in 1994 to become president of Western, he accepted. Making the transition was very difficult for him, but the students welcomed him. The first week they pulled pranks every night, filling his office with all the plants from the building, then every toilet roll they could find, then balloons, and finally an inadvertently dead goldfish (a story for another time!). Dennis loves it when students feel trusting enough to give him a hard time.

Dennis quickly realized he was called to be there. “I didn’t come with any plan, but I came with convictions of who we should be,” he says. “We are evangelical, Reformed and ecumenical. We start with the core of the gospel, centered in Jesus Christ.”

Long-time colleague Jim Brownson says that Dennis functioned as a theological anchor for the school, with his pastoral presence releasing an enormous amount of creative energy for productive work. He led by encouraging and supporting the people around him.

Dennis is very proud of the institution, the people, and what has developed. “But it’s only by God’s grace!” he is quick to point out. “You can love people, hope and pray that community happens, but you can’t engineer it.” 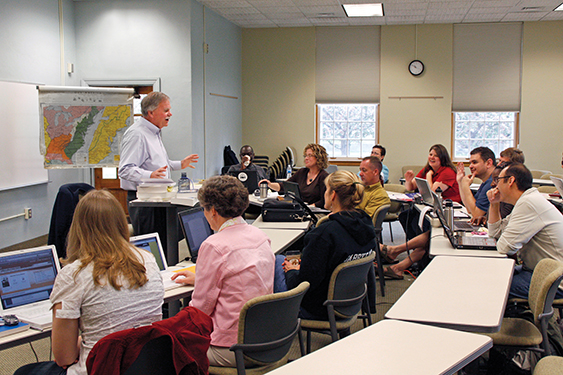 Betty helped him every step of the way, blessing the seminary with her gift of hospitality. At Hope College she had hosted parties in their home for every class Dennis taught. At the seminary she threw several Christmas parties each year, and every student was invited to their home multiple times. The Voskuils infused the seminary with their love and care.

In 2008, Dennis stepped down from the presidency in order to return to teaching as the Marvin and Jerene DeWitt Professor of Church History for the six years that followed. He retired in June of 2014 and continues to teach courses on Christian history as an adjunct professor.

In the fall of 2015, Dennis will make another transition, this time to head the A.C. Van Raalte Institute at Hope College, which is dedicated to historical research with an emphasis on Dutch American history. His love of history continues. “I think real life is so exciting and history so rich, I can’t imagine devoting my life to anything else!”