Indigenous Theology, in some ways, may be thought of as the universal system promoting the Common Good. The Western worldview has, in many ways, alienated humanity from the purposes of Jesus and from serious action concerning reconciling with the community of creation.

Centering Jesus in our theology as the cosmic Christ/Creator and understanding his mission as reinterpreting the ancient Sabbath/Jubiliee/Shalom system for all people will shed light on how far the Western worldview has taken us from those who wrote in the Scriptures and the Christ we follow.

Rev. Randy Woodley, PhD, is an activist/scholar and distinguished speaker, teacher, and wisdom keeper who addresses a variety of issues concerning American history and culture, missiology, shalom, postcolonial theology, community-building, faith, socio-justice, diversity, regenerative farming, climate-change and our relationship with the earth and Indigenous realities. Woodley regularly blogs in these areas and publishes his own blog, ” Ethnic Space and Faith.” He also has a new podcast out called Peacing it All Together.

Randy was raised near Detroit, Michigan and is a legal descendent of the United Keetoowah Band of Cherokee Indians in Oklahoma. He is a member of the Oregon Department of Education American Indian/Alaska Native Advisory Board, Greater Portland Native American Climate Council and other service organizations.

Dr. Woodley was pastor of the Eagle Valley Church in Carson City, Nevada, which for many years served as a unique role model as an authentic Native American Christian church. He and his wife Edith, cofounders of Eagle’s Wings Ministry, are considered early innovators in what has been dubbed the “Native American Contextual Movement.” The Woodleys have spent over 25 years of culturally contextual service in Native North American communities. Randy Woodley is a founding board member of NAIITS, the North American Institute for Indigenous Theological Studies and he administers the Fox/ NAIITS cooperative Master of Arts Intercultural Studies degree. 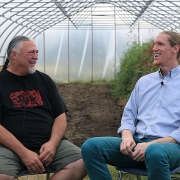