After 19 years on the faculty of Western Theological Seminary, Professor of New Testament Robert Van Voorst is retiring on June 30, the end of this academic year.

Dr. Van Voorst has had a unique impact as a professor, because in addition to teaching an average of 50-75 students at Western each year, he teaches thousands of other students in the U.S. and Canada in more than 200 colleges, universities and seminaries through his seven textbooks in New Testament, the history of Christianity, Greek language, and world religions.

“To research an academic field and contribute to it in a creative way—that’s an important thing for seminary professors, for their students, and for the church,” Dr. Van Voorst says.  “And it’s a lot of work!” Much of his writing has been done in the summers, on days he didn’t teach, and on sabbaticals.

When contrasting teaching with writing, he notes that there is an emotional high to walk out of a class with lots of interaction and think, “That session clicked with the students!” Writing, on the other hand, is a rather lonely thing. “You write by yourself, send it off for anonymous peer review, and after it gets published, sometimes you know who uses it, but often you don’t.“ A happy point of feedback is when new seminary students who used one of his books in college tell him about their experience, usually beginning with, “Are you the Van Voorst who wrote that book?” His books are regularly used at Northwestern, Central, and Calvin Colleges, important “feeder schools” for WTS. 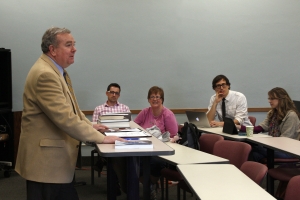 Bob has also written books for use by pastors and lay people and two research monographs for scholars of the New Testament and ancient church history. His most recent book is Commonly Misunderstood Verses of the Bible: What They Really Mean.

Bob felt a calling to the ministry at a young age, so his high school and college studies were aimed in that direction. He majored in religion at Hope College, and in his M.Div. studies at Western he specialized in New Testament. Before his teaching career, he was an RCA pastor for 12 years in New York, and for eight of those years he studied for a Ph.D. in New Testament at Union Theological Seminary in New York City. He thoroughly enjoyed pastoral life, and the experience later helped him prepare students for ministry in a realistic way.

After his pastoral experience, he taught for 10 years at Lycoming College in Williamsport, PA where he helped to educate many United Methodist pre-ministerial students. At Lycoming he began to research and publish in the field of world religions because he was assigned to teach it regularly. He also served as a supply pastor in several PC(USA) churches. The passion driving his work all these years has been for ministers to know the Bible well and use it responsibly in ministry.

In his retirement, Bob hopes to do more pastoral work in churches, to keep revising his textbooks (most of which are on a 2-5 year revision cycle) and write new books that could be helpful to the church. His immediate task is serving as the guest editor of a special issue of the international journal Religions on the topic of current methods in New Testament study.

He expects to keep in contact with many of his former WTS students. Most importantly, he and his wife, Mary, hope to spend much more time with their children and grandchildren.

The Ascents of James: History and Theology of a Jewish-Christian Community (1989)

The Death of Jesus in Early Christianity (1995)

Commonly Misunderstood Verses of the Bible: What They Really Mean (2017)

Your New Testament Foundations course has provided many hours of joy and reflection as so many of my theological questions have been answered in clear and insightful ways.

Congratulations, Bob. You are a blessing to me and to so many others. Thank you for your teaching, your writing, your leadership, and your humor. Praising God from whom all blessings flow!

Thank you for your many years of devoted work to our school. I especially appreciate the way you continue to prod us all toward high academic standards and taking our roles as faculty members seriously. I will miss your expertise on the many subjects you know so well.

“It’s all Greek to me” has never been more understood or chuckled over since my class with you.

I have deeply appreciated your availability to me as a senior colleague. Thank you for your commitment to academic excellence and your concern to uphold the theological integrity of WTS in the course of key faculty decisions.

I loved my World Religion course. We students were so involved individually and together in the classroom with you. Thank you for your excellent teaching.

I have appreciated working with you in the Master of Theology program. Your ongoing interest and your work teaching and advising the students has been a gift.

Congratulations! WTS is going to have a tough time replacing you. Thanks for all you have done to encourage and support many students throughout the years.