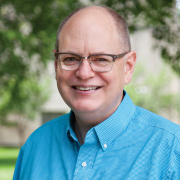 My call to ministry came while I was a student at Michigan State University many decades ago. I was very interested in joining the staff of Young Life, a vibrant youth ministry I had been involved with as an adolescent and which had a training program aligned with Fuller Theological Seminary in California. I thought I would go there until I met the regional director of Young Life in Michigan in the winter of 1981. He suggested that I become part of the Young Life staff in Holland and take classes at Western Theological Seminary.

I had hardly ever heard of Holland. I knew nothing of Western, Hope, or Calvin, and certainly had never heard of those two rival gangs: the RCA and CRC. My initial invitation was to come to Holland for a visit. I vividly remember meeting John Hesselink and Gene Heideman at the seminary and community members like Lars Granberg, Ray Smith, Glenn Van Wieren, and Jerry Nienhuis, who, with their spouses, were the backbone of the local Young Life committee.

I liked it all so much I came to Holland, started working for Young Life, and enrolled at Western. I was not alone—my friend Tim Jenkins came with me and did the same things that first year. (Tim is still my friend—now he’s Dr. Timothy Jenkins, Dean of Students at Valparaiso University.)

The connections between Young Life and Western were already in place. Both Dr. Eugene Osterhaven and Dr. I. John Hesselink had taught classes for Young Life at their summer institute in Colorado Springs. Other students followed Tim and me, and over time the connections became stronger and stronger.

After 29 years with Young Life, I joined the staff of Western in 2012. I’ve since been joined by Dr. Ben Conner, another long-time Young Life staff member, who now teaches on our faculty. There are several other points of contact: Dr. Suzanne McDonald taught theology to a couple hundred Young Life staff in January in Florida; President Brown teaches and preaches for Young Life every year at their Area Director School; Western is one of a handful of seminaries that are formal training partners with Young Life; and several dozen Young Life staff from all around the country transcript courses through WTS.

On top of all that, four local Young Life staff members received degrees from Western on May 13. Eric Zoodsma and Paul Knapp both received M.A. degrees, Josh DeHaan received an M.Div., and Kevin Eastway earned a D.Min.

Kevin’s doctor of ministry project focused on developing a spirituality of fundraising for Young Life. I was privileged to be one of the advisors on his exciting project and spent time helping him understand both the history of Young Life as well as analyze its current realities. Kevin is going to present his work to Young Life’s president and members of their mission leadership team this summer.

It’s hard to believe all the kingdom-centered relationships that have sprung up since that summer day in 1981 when Drs. Hesselink and Heideman welcomed me to Western’s campus. I praise God for all of them and the fruitful partnership between Western and Young Life.