“I used to assume that God owed me a long life—to pursue a vocation and family with full strength, to live long enough to become a grandparent,” says Dr. J. Todd Billings, Gordon H. Girod Research Professor of Reformed Theology. “Then, at the age of 39, married with two kids ages one and three, I was diagnosed with incurable cancer. I realized I had unwittingly embraced a form of the prosperity gospel, and my expectations had to change.”

Many readers of The Commons will recall the Bald Guy Challenge of 2013 when 17 people—the seminary’s president, his son, a former president, three professors, one staff member, nine students, and Todd’s own father out in Kansas—shaved their heads in solidarity with Todd, who had gone through five rounds of chemotherapy and was about to receive a stem cell transplant. They also raised $3,100 in the process for the Multiple Myeloma Research Foundation. 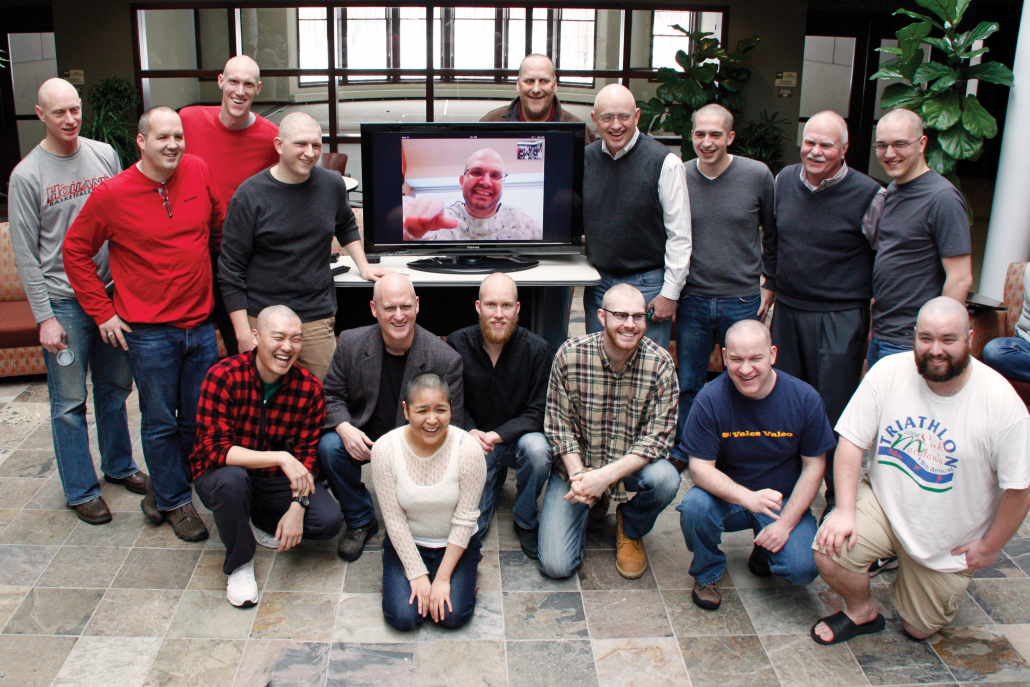 Dr. Billings received his stem cell transplant in March of 2013 and spent several months in quarantine (something we are more familiar with these days!). It was successful, and that summer he was told his cancer had gone into partial remission. Since the cancer is incurable, the future remains uncertain, but he is grateful for these years, even as he continues chemotherapy to keep the cancer levels as low as possible. The chemo and other cancer treatments have taken a toll on his physical health, giving him daily pain and intense fatigue. Yet, he has also discovered that this process of coming to terms with our limits as dying creatures can be a life-giving path.

It has also been a theological journey. “There are beliefs I express now that I would not have expressed this way before,” Todd says. “When I was first diagnosed, I had a lot of new questions that became urgent in regard to providence, lament, and prayer. I turned my attention to those ‘why’ questions, and soon a book came out of that.”

Rejoicing in Lament: Wrestling with Incurable Cancer and Life in Christ (Brazos Press, 2015) engages the open questions, areas of mystery, and times of disorientation in the Christian life, moving beyond pat answers toward hope in God’s promises.

The questions didn’t end there. In 2016, with the help of a grant from The Louisville Institute, Todd started studying how congregations deal with death and dying. He enlisted pastors, current students, scholars, and medical personnel to engage in colloquies and discussion groups. He also became immersed in the cancer community, where dying and death are daily realities. The result of this exploration and research was his new book, The End of the Christian Life: How Embracing our Mortality Frees Us to Truly Live (Brazos Press, 2020).

“Technology, medicine, and religion train us to think of ourselves as immortal, as if death is something that applies to other people,” says Todd. “But death can teach us about life. Our mortality can be a gift to us.”

In the past when he has asked seminary graduates about their greatest challenge in ministry, the most common response has been “death and dying”—advising families on medical decisions, funerals, comforting parents who have lost a child, etc. He is hopeful that his latest book will help pastors and congregations in “the lifelong task of learning to live in the joy and sorrow of mortals, held in hope by the Triune God who will come again in Christ to make all things new.”

Strengthened by the prayerful solidarity of the WTS community when he entered the hospital in 2013 for his stem cell transplant, Todd has been given a gracious extension of his life. His children, Nathaniel and Neti, are now nine and eleven and bring great joy to him and his wife, Rachel.

“I know that my cancer is incurable and stubborn,” he says. “Others face stubbornness in their circumstances, as well. I have learned that we don’t hope in our own ability to keep on hoping. We hope in God, who can make dry bones of hopelessness live again (Ezekiel 37)—the God who raised Jesus Christ from the dead can surely resurrect my hope from the ashes, for we have something better to trust in than ourselves and our own heroic ‘faith.’ We have a God who does not forsake His work in us, because it is, after all, His work and His covenantal promise to be our God.”

God’s Hand on Our Lives Empowering through Language